Here’s another nice piece of research from The Journal of Shoulder and Elbow Surgery  detailing the anatomy and kinematics of the Lateral Elbow Complex.

The structure and kinematics of the lateral collateral ligament of the elbow joint were investigated in 10 cadaveric specimens.

The lateral collateral ligament was observed to be a distinct part of the lateral collateral ligament complex. It contains posterior fibers that pass through the annular ligament and insert on the ulna. Three-dimensional kinematic measurements in different forearm rotations showed that joint puncture induced a 1° joint laxity significant in forced varus from 30° to 80° of flexion and in forced external rotation from 30° to 120° of flexion. Division of the posterolateral capsule caused no further laxity. 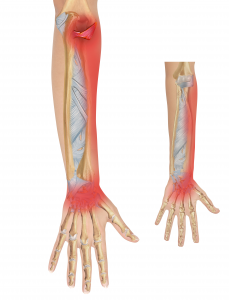 This study suggests the lateral collateral ligament to be an important stabilizer of the humeroulnar joint and the radial head in forced varus and external rotation. The humeroulnar stability is independent of forearm rotation.

Interested in learning more…
To learn more about the functional anatomy of the lateral collateral ligament complex (LCLC) and the surrounding forearm extensors, Go Here.

Sample from the Compilation Course

This course is a compilation of my most effective techniques for each major body area.

In this Online Course I'll teach you how to:

You get 10 exclusive video lessons instructing strategic techniques I've developed over my 22yrs+ career and 15yrs+ of continual research, practice and study. Included, as always, is the full colour Course Manual, downloadable Video Lesson Transcripts, a 1-Page PDF schematic of the Neurophysiological Model for Referred Pain.

All lessons are delivered online, so you’ll have lifetime instant access and can learn from anywhere, anytime.

THANK YOU so much for being interested in the 2020 LIVE Mentorship Series.

I’m sure your Patients appreciate your desire to continually advance your education and skill level.

The 2020 Mentorship Series is currently on hold until the BC Health Minister provides us permission to continue “in-Person” education.

For now, I’m saying “Thank You” with an amazing discount on the LAST Online Courses for you.

Enjoy the savings and lifetime access to the videos.
– Robert